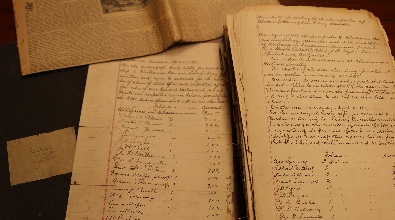 The organization of the Chattanooga Bar Association on April 15, 1897, was precipitated by a disastrous fire on April 3, 1897, which totally destroyed the Richardson Building where Miller Brothers Company department store building  now stands (the Blue Cross Blue Shield Annex).  This building was six stories in height and was then said to be “one of the largest buildings in the south.”  Its architect claimed it to be fireproof, yet by cruel irony was cremated in the consuming flames.  In the words of the first president of the Association, “it (the Richardson Building) was a nest of homes of a majority of the members of the Chattanooga Bar and in its destruction were washed many thousands of volumes of valuable law books.”  The lawyers occupying this building had evolved a neighborly and convenient custom of mutual sharing of libraries with resulting substantial individual savings. But with the total destruction of the building, few lawyers could afford to duplicate their lost libraries.  So, they lost no time in pooling their resources to establish a joint library through the medium of an organized association.  According to Reginald Heber Smith’s history of local bar associations, the economy of a central library appears to have been the compelling reason for the organization of a high proportion of local bar associations.  On April 9, 1897, R.L. Bright, Robert Pritchard, J.B. Frazier, Frank Spurlock and A.W. Gaines applied for a charter for the Chattanooga Bar and Library Association, which was granted by the Secretary of State on April 13, 1897.  On April 15, the incorporators met in the law office of A.W. Gaines, and after R.L. Bright was elected Chairman and A.W. Gaines Secretary, the charter was accepted and the books thrown open to stock subscriptions.  At 3:00 p.m. on the same day, the stockholders met in the Chancery Courtroom.  W.B. Swaney was elected Chairman and L.M. Thomas Secretary.  The charter was accepted and ordered spread upon the minutes; bylaws were adopted and the original incorporators were elected directors.

On its fiftieth anniversary, the Chattanooga Bar Association received the “Award of Merit” from the American Bar Association, thus being the first local bar association south of the Mason-Dixon line to achieve this honor.

The 1972 Diamond Jubilee administration was perhaps the most important administration since the founding of the Association in 1897.  This was made so  because Raymond R. Murphy , Jr., as President, and Charles J. Gearhiser, as Secretary, were men of vision, who saw the need of restructuring and reorganizing of the Association to meet the needs of the fourth quarter of the Twentieth Century.  Stock ownership of the library was eliminated and a revision of the bylaws was begun so as to intelligently guide the Association through the fourth quarter century.

April 15, 1998, marked the end of the Centennial of the Chattanooga Bar Association. There were several projects that the CBA started and completed in 1997. A Domestic Relations Commission, chaired by Ann Gaines Darlington, was established to address issues as to how the system can handle domestic violence, improve the domestic relations dockets, whether the system needs magistrates, and whether the system needs a “Domestic Relations Court”. Sixty percent or more of the dockets in Hamilton County Circuit Court are domestic relations matters. One of the main events that occurred in 1997 was SCALES. SCALES, (Supreme Court Advancing Legal Education to Students) not only educates the youth of the community, but is a project bringing the students, teachers, parents and lawyers together. The project provides the participants with an opportunity to discuss cases and the legal justice system. A Special Commission on Pro Bono was established to make recommendations to change the existing program and continue to develop the method in which we deliver legal services to the poor. This is a small sampling of what was accomplished in 1997. We, as an Association, have reason to be proud of some of our accomplishments.